Toward a Philosophy of Female Affection 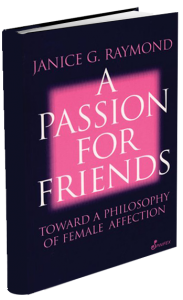 The ancient Greek philosophers believed that politics was the business of friends. Aristotle wrote that friendship glued states together and cemented political alliances. However, the citizens of the Greek city-states were exclusively male and these political theories were based upon strictly male friendship.  Since classical antiquity, philosophers have continued to probe the meaning and importance of friendship, yet the history of female affection has remained obscure. A Passion for Friends depicts the historical and cultural diversity of women’s association with one another and envisions a future in which friendship provides the basis for feminist purpose, passion, and politics.

“Hers is a brave undertaking, and she begins by facing the central issue of women’s friendships: the necessary relation of these friendships to power and the public sphere…. Raymond’s is the most probing and honorable discussion of female friendships we have…”

Buy A Passion For Friends